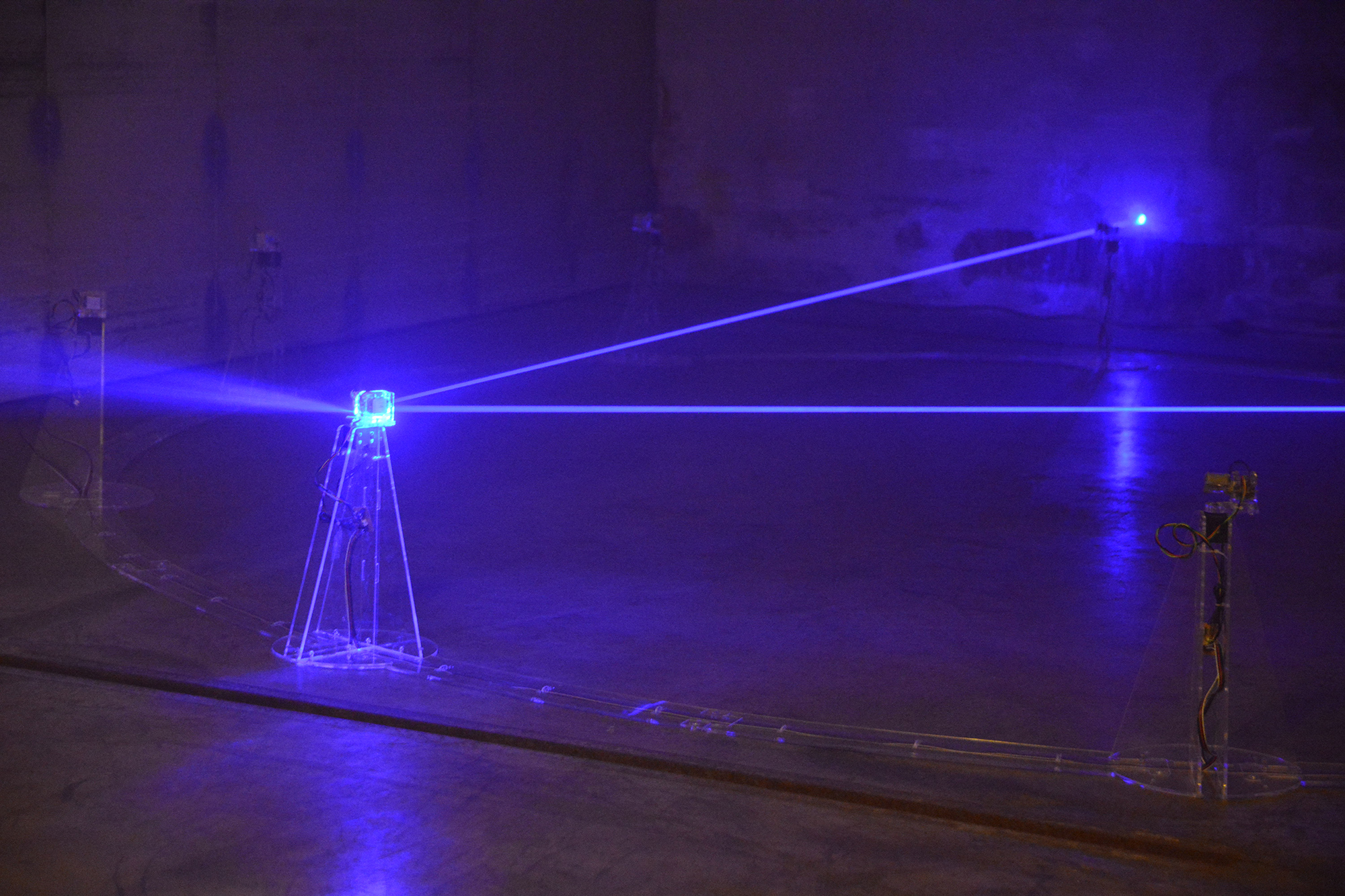 It refuses to behave according to its original rules and insists on avoiding people. part 1.1.

This project takes the form of an interactive installation driven by a laser beam which interacts with the audience by bouncing on a number of computer-controlled mirrors in order to avoid people. The laser beam, according to the Hollywood-esque code, works simultaneously for delimiting space and as an intruder-detection system. In the case of this work, this laser beam loses its original use because it “acquired a phobia towards people,” causing it to avoid people constantly. Each time someone or something blocks the beam, the system reconfigures its mirrors so the beam avoids the blocked route, generating a new space delimitation, although this route is originally chosen randomly and fed into a machine learning algorithm, so the next time it can make a better decision. It learns by “trial and error.” The whole learning phase of this work happens during the show, so this relationship between human interaction, errors and learning becomes a new narrative layer of this work. As such, the poetics of an interactive work are fed from the possibilities of unprejudiced experimentation, assimilating the boundaries where the real meaning of discovery lies, encompassing the sensibilities of experience and assuming the conditions that technology currently offers.

This project was developed during the Computational Arts residency setup by the Department of Computing at Goldsmiths, University of London and the Victoria and Albert Museum Digital Programmes, during the summer of 2018. It was presented in 2018 at the Ars Electronica Festival in Linz, Austria and in the Digital Design Weekend at the Victoria and Albert Museum in London. Unfortunately - and quite ironically- the installation did not work. It was not properly finished and tested by the time of these exhibitions. But it will be shown soon.

Some years ago I was working on some not so interesting commercial projects which I tended to avoid; instead, I was constantly working on my own artistic and expressive projects. Art making became my form of procrastination. For one of these commercial projects I had to deal with some really obnoxious machines which often had strange behaviors and sometimes quite interesting results, yet unexpected and useless - in the sense of its original use. Then the idea came, probably out of joking, that this machine was doing just the same as I was: procrastinating and doing some art instead of working. This idea went a lot deeper than a simple joke and opened several questions. What are the relationships between human and machine? What new kinds of understanding can we gain by looking at the similarities in their behaviors? Can these new “intelligent” machines have psychological problems very much as their creator could? Is it possible that machines become obsessed with something and execute a task in a compulsive and repetitive way or is it just their very nature to engage in endless and monotonous routines? At which point can we understand these odd behaviors as something new instead of a malfunction? Is it error what finally provides meaning to the human-machine relationship, and ultimately to the whole human experience?

On 2015 I was invited to participate at the Valparaiso Arts Festival (Festival de las Artes de Valparaiso, FAV), yet the formal approaches to this new idea were not fit for the festival’s curatorial line; I wanted to work the same idea but had to make something new. As I had very little time and a really scarce budget, the end result was a failure. Nothing worked at the festival, although I gained some really important knowledge. Tragicomically, its name was Defective Apparatus: It refuses to behave according to its original rules and insists on avoiding people. part 1. It was the first version of this project. Now, on its second version it failed to work once again.