Interactive visualization of the brain in default mode.

I was part of the Default project, for which I designed and coded the visualization, as well as advising about interactivity.

Default is an interactive and immersive piece about the brain’s activity while at rest. It was the result of an interdisciplinary dialogue project between Manuela Garretón -Designer- and Tomás Ossandón -Neuroscientist.

It used to be assumed that the base brain activity -the one that precedes stimulus- had no relevance. Nevertheless, evidence reveals something astonishingly different: the brain uses a large amount of energy while it is not being stimulated and these moments are the ones that take the largest amount of time through out our life.

This spontaneous dynamism depends on the Default Mode Network (DMN) -a mesh which is always active, except on the periods when doing tasks or reacting to external stimulus, moments in which it briefly disconnects. This network integrates memories of our life, as such it could explain a lot of the unknowns about self-consciousness and relevant processes such as creativity.

Default is conceived as a visual and sounding environment made from the data gathered from a Functional Magnetic Resonance Imaging (fMRI) exam -used for studying brain activity- of a person at a state of rest. The room where this piece was shown was a brain itself, thanks to 3D visualization of data, data based sound design, and space and interaction design, which allows to know the cerebral states of a human experience that everyone unconsciously goes through.

Default’s purpose was to captivate the audience through aesthetic enjoyment while at the same time would awake curiosity about the deeper states of the mind. 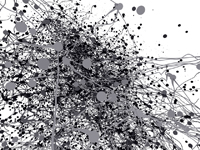